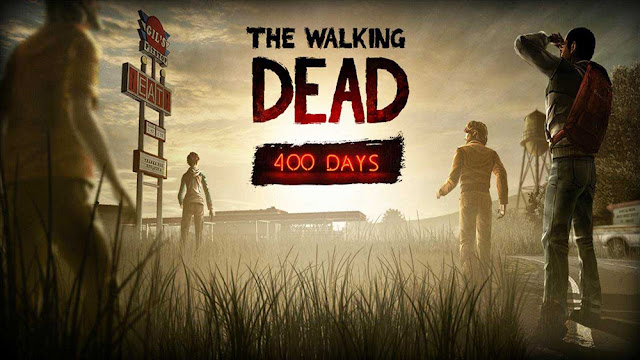 I have taken care not to ruin the story of 400 Days.


Introduction
400 Days is story-focused, downloadable content (DLC) for the action-adventure title: The Walking Dead (my review). It requires a purchase/installation of at least 'Episode 1' from the previous season and is available for PC, Xbox and PlayStation from July 2013.

Disclaimer: This is still a mature experience. Featuring the same levels of violence, language and psychological themes of despair, peril and terror found in the first game.


The First Thing
Given that this is DLC, my first impressions are irrelevant. However, I will say that I found the change to short separate stories from a singular story slightly jarring.


Plot & Devices
400 Days tells the stories of five people (Vince, Shel, Bonnie, Wyatt, Russell) and how they ultimately came to be united into one group. Each story happens a certain number of days after the apocalypse and although the characters do not directly interact, the stories occasionally echo each other. Each tale is in some way connected to Gil's Pitstop - a highway truckstop.

No main character from the original game is present (No Lee, Clementine, Ben etc.). Once or twice previous events are referred to in some small way, but no decisions or outcomes are influenced by choices made in Season 1. The five new character stories can be played in any order, but to play them chronologically would be: Vince > Wyatt > Russell > Bonnie then Shel. I have read that the order played has an impact on outcome, but I personally do not believe this since I unintentionally played them non-chronologically and did not feel it could be otherwise.


The Game
If you have played The Walking Dead then there will be no gameplay surprises here. 400 Days features the same control scheme and gameplay that can be read about in my review here. This DLC took me a little under an hour to complete and I encountered no bugs.


Wrap Up & Negatives
There is nothing much wrong with the game, unless you compare it to the first. I feel this is viable source of criticism since 400 Days is a story-based addition, rather than a stand-alone sequel.

Each story is short, about 10 or 15 minutes in length, making it much harder to develop any emotional investment. This has the knock on effect of rendering 'important' decisions less meaningful. How are we expected to care about the fate of people we have only known for 3 minutes? 400 Days does try hard to make you care, with excellent dialogue, difficult decisions and fantastic voice acting. But often it felt quite artificial when compared to the elegant character development of the first season.


This negative is further compounded by the mindset developed from Season 1 with regard to strangers. One of the key sources of tension in The Walking Dead is to do with unfamiliar characters. You develop a strong sense of protecting the people you know/like and are wary of strangers and their potential threat. Since the player does not know any of the characters from 400 Days, and is never presented with enough time to become familiar, I feel this sets up a subconscious conflict in the two games.

A couple of times I felt like my choices did not matter. It is still unreasonable to expect a game to have infinite choice outcomes, but The Walking Dead did a much better job of disguising this. The problem with 400 Days is that sometimes it is painfully obvious that choices and development time are limited. Without giving away much, at one point I had to decide whether to take a lift from a stranger. I opted not to, but a few seconds later a hoard of zombies magically appeared from nowhere to render my decision moot. I resented being asked to do something when the story could only go one direction. Conversational choices also feel impotent since there is not enough time to develop personal relationships.

One final small gripe I had was the re-using of faces from the previous game. I understand that development time is limited and they at least tried to disguise them with new hairstyles. But for me it was disturbingly obvious that Shel has the same face as Lilly. Normally I am not bothered by the practical re-use of art assets, but in a game where you forge personal connections with characters it can be a little silly to see them again with a new hair-do.


Personally
When I discovered that 400 Days is effected by the choices made The Walking Dead (Season 1), I rushed through the first game a second time - since I had lost my save files in a computer re-install. I am glad I did this, but at the same time it influenced my experience of 400 Days. The story telling in the first game is exceptional where you are (essentially) tricked into believing your choices matter. The writing and decision making process all contributed to meaningful, and emotional, character development.


The problem with 400 Days is that by comparison it was a disappointment; not only a much smaller experience, but also split amongst five new characters. Events have more of an obviously fixed outcome, whilst interspersed with the occasionally "heart wrenching", random binary choice. There is little emotional connection to the characters, or the events that transpire. There is a world of difference between feeling a genuine emotion, and simply being told to feel it.

Still... It is only DLC; and quite cheap DLC at that. It is the same basic 'The Walking Dead' experience which is still fun to play. It is well voice acted, the dialogue is good and some of the sequences are quite entertaining. It seems likely that this sets up the events for Season 2 in some way - so probably worth playing for those that want to experience a continuous story. Just be aware that it carries none of the depth or complexity of the excellent title it builds upon.

Email ThisBlogThis!Share to TwitterShare to FacebookShare to Pinterest
Labels: 2013 Review